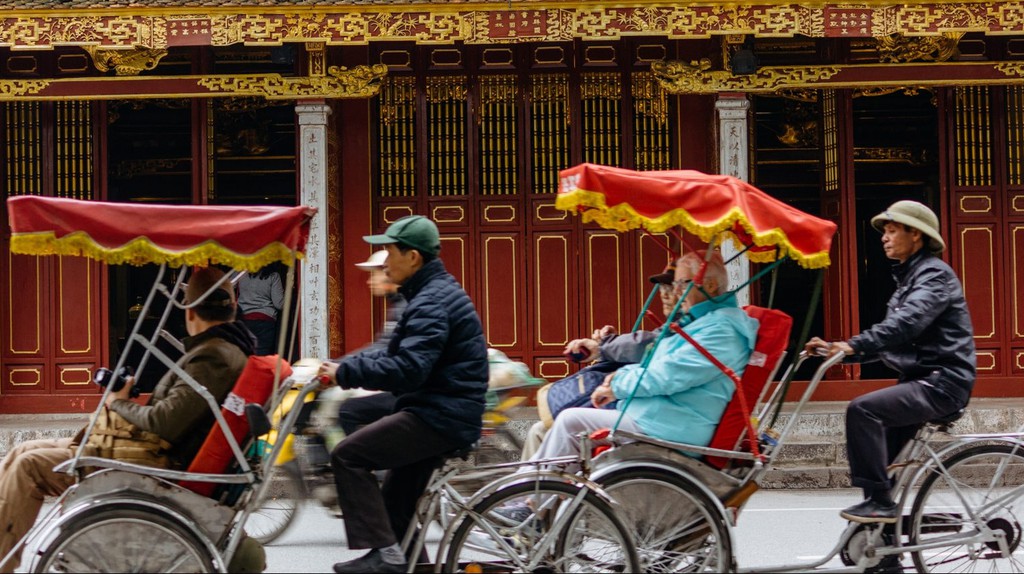 An early stroll around the city

Get acquainted with Hanoi (and Vietnam) by going on an early morning stroll. Grab a banh mi (Vietnamese baguette sandwich) and a ca phe sua da(Vietnamese iced milk coffee) from a sidewalk stall and just walk. If you head out around 05:00 a.m., you’ll be able to witness the city wake up.

Head to the Old Quarter, which is the historical and commercial center of the capital. There are 16 streets here you can explore, with each street named after what the majority of the shops specialize in. For example, Hang Gai street is silk street, and this is where you will find most of the tailor shops. Walk around aimlessly as you will come across the best sights this way. Homeowners cleaning the streets, doing light exercises, setting up food stalls, taking their children to school on rickshaws, you will see it all.

After your breakfast, start walking towards the Ho Chi Minh Mausoleum. It will take you around 20 minutes to get there. Ho Chi Minh, or Uncle Ho as the locals refer to him, was Vietnam’s president from 1945-1969 and was a key figure in the Vietnam War, under whose leadership Vietnam finally gained independence.

Inside a glass case lies the embalmed body of Uncle Ho so you can pay your respects and then walk around the square and park outside. You may even catch some locals doing Tai Chi. Don’t be afraid to join them, they will be more than happy to help you learn the movements.

Carry on walking to Hoa Lo Prison, known as the Hanoi Hilton. This was built by the French to punish Vietnamese political prisoners and later used by the Vietnamese to hold American prisoners of war. A famous example is Senator John McCain, and you can still find his uniform on display. The prison is a little haunting. There are many mannequins depicting scenes of what life was like inside the prison walls, and it is not for the faint of heart.

Since you woke up early, it’s good to have a slightly early lunch to replenish all that energy spent from walking around and sweating thanks to the heat. Grab a xe om (motorbike taxi), use either Uber or Grab apps, or hail yourself a motorbike to head to your next destination: Pho Gia Truyen on 49 Bat Dan Street. Motorbikes are the best way to get around here as they can zigzag their way through traffic. If you opt for a car taxi, you may be stuck in one place for hours. 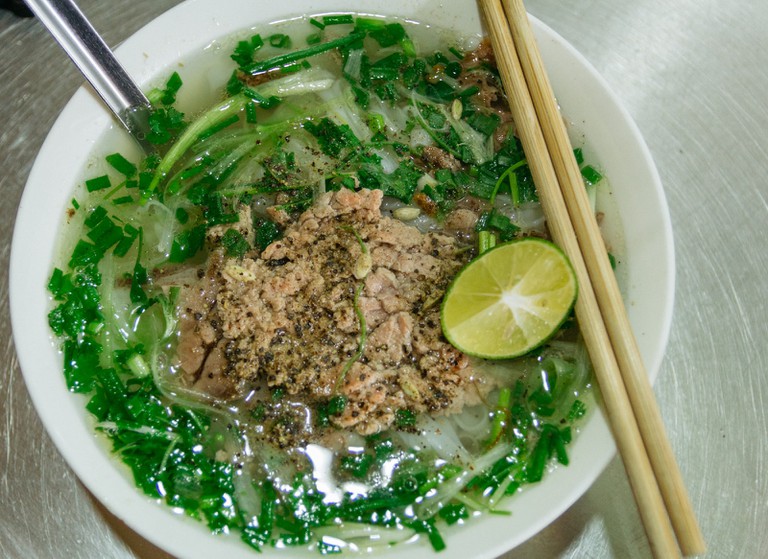 Pho Gia Truyen is where you can find the best pho in all the land. Pho is the national dish of Vietnam and one you must try. It’s made of three components: a flavorful broth, noodles and some type of meat, typically beef. If you are vegetarian, just order the vegetarian version by saying “chay.”

After lunch begin walking again, this time to the tranquil Temple of Literature. This was the first ever university in Vietnam, initially for noble families but it later took an egalitarian approach to admissions. It was built in 1070, making it one of the oldest structures in the city. Walk around, snap some shots and rest a bit in its many courtyards. 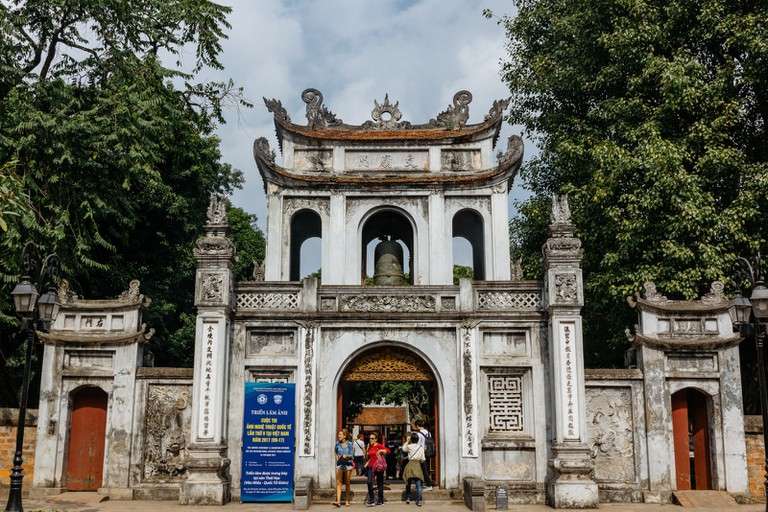 Get your Uber app out again or hail another motorbike taxi after you finish with the Temple of Literature. Plug in Café Giang as your destination and enjoy zigzagging your way through the crazy daytime traffic of the city. At Café Giang, you are in for a surprise. This is where the original – and best – egg coffee in Vietnam is served, and you can ask the barista for the story behind it. Enjoy your creamy cup of what can only be described as liquid tiramisu, and enjoy the air-conditioned venue for a while as the sun slowly goes down.

Evening: Relax by the lake

Walk over to Hoan Kiem Lake, which is not so far from your location, and enjoy a stroll around the cool premises. It’s a popular hangout spot for locals and tourists alike. In the middle of the lake is an island on which Ngoc Son temple is built, and connecting it to the land is a gorgeous scarlet bridge. It’s extremely photogenic. 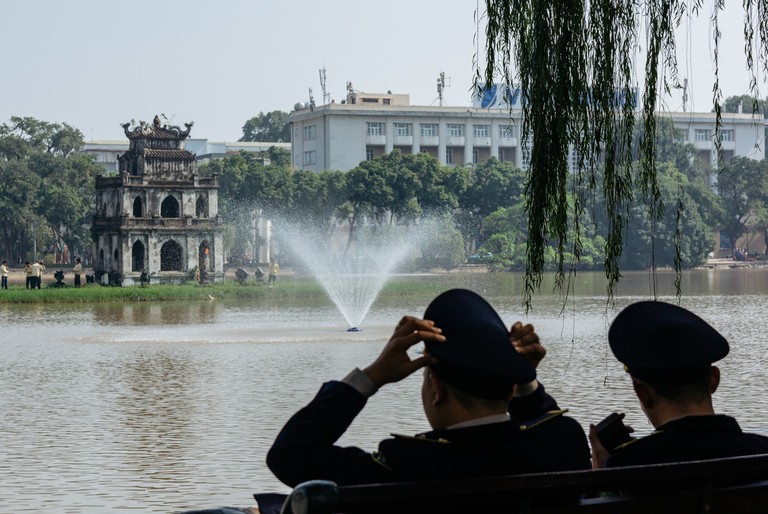 Next, head over to Thang Long Water Puppet Theatre and catch a show – it’s right on the outskirts of the lake. Water puppetry is a centuries-old art form in Vietnam, with its many different guilds and styles of puppets, such as string, hand and shadow puppets, and even kites and puppets with fireworks. The performance combines these various styles with live music and involves various scenes from Vietnam’s myths and folklore, with the country’s agrarian life as a backdrop.

Back to where you started: The Old Quarter

After the show, walk around the Old Quarter again and do some night shopping. If you’re looking for cheap souvenirs, here is where you can get it. To end your day in Hanoi, you must eat like a local – on the street. Most streets in the Old Quarter consist of small street restaurants where customers are seated on child-like plastic stools that have spilled out onto the sidewalk. Pick any place that seems crowded and ask to try what everyone else is having. Local favorites include pho, bun rieu, com tam, bun cha, and bun thit nuong. 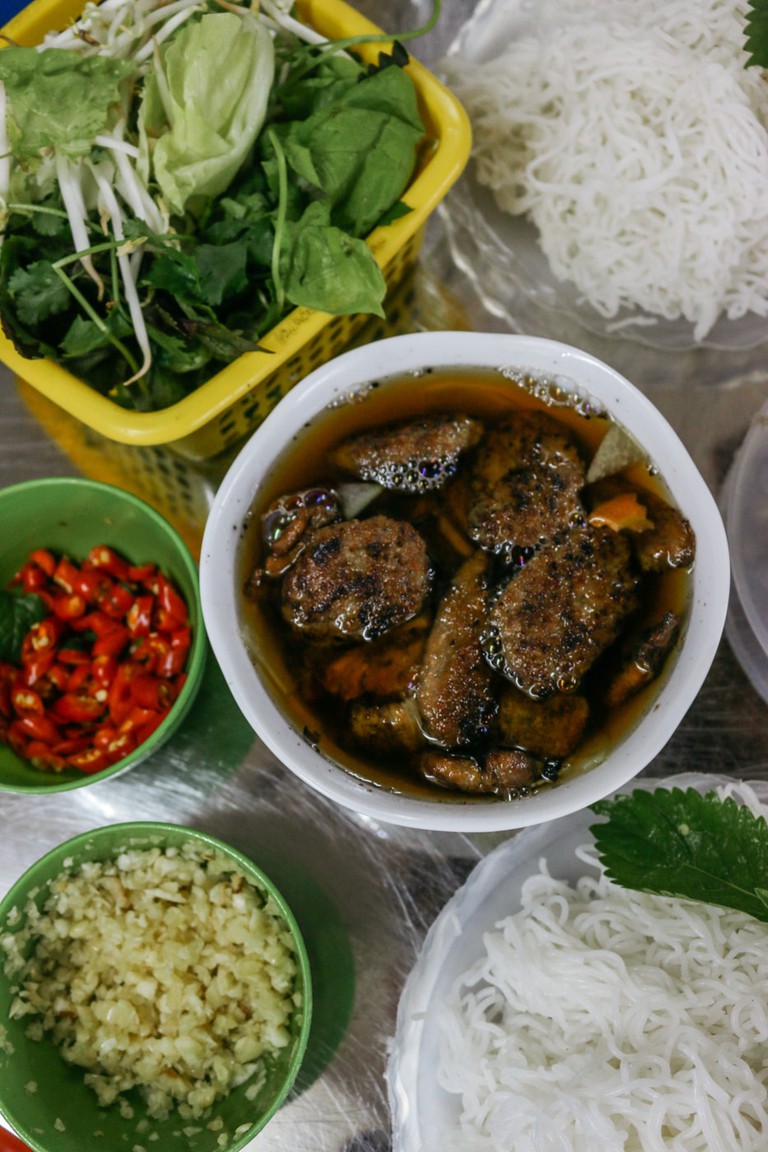 After your meal, you can either walk around a little more or drag yourself up to your hotel, which is hopefully located in the Old Quarter because you’ll be too full to walk far. We recommend you stay at the Hanoi La Suite Hotel & Spa or the Hanoi Allure Hotel, where you can get a good night’s sleep.